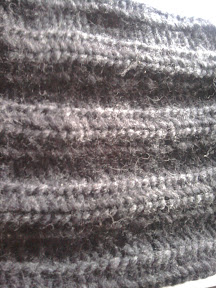 What do you think this is? Why it's a 2x2 rib knit sideways! I really don't know why it's sideways, but it's part of my winter hat, which is unfortunately useless in the warm weather we have been experiencing in the last week.  I knitted this a couple of weeks ago using non-worsted yarn (I don't know if there's a term for that). This is less complex compared to the cable knit hats I made for my mom and sister, but it's so comfortable and simple.


I had two problems with this knit. The fact that it wasn't worsted made it a pain if I had to reverse my knitting when I made my mistake. When I did the gathering cast off, pulling the yarn through the loops was a delicate process. Pull too hard, or have the working yarn touch the loop edges too much made the yarn break because of too much tension.

I also prefer super bulky for hats just because my knit stitches are close together and form a v shape. With bulky there is a little space in between. I know if I really wanted a v shadow I would used the twisted stockinette (e-wrap) stitch but it is so messy looking.

A majority of people have rib knit stitch hats in the wintertime, and most of the time they are made with acrylic yarn. It's a great simple pattern to knit and gives some stretch. It also doesn't take that long but you have to be used too knitting peg by peg.
Posted by Mel at 10:23 AM

Mel
A student with a need for creativity and something to keep my mind off of schoolwork. Knitting can be challenging at times, but I don't have to sit at the computer for 6 hours and ponder how certain readings relate to my thesis. I also am experimenting with regular knitting needles and crocheting, but loom knitting requires less thought.